The first quarter has been a banner period for Wall Street.

The S&P 500 is up more than 12 percent this quarter and is on pace to notch its best start to a year since 1998. The broad index is also set to post its biggest one-quarter gain since 2009.

Accompanying the S&P 500 in its ride high to start off 2019 are the Dow Jones Industrial Average, Nasdaq Composite and the Russell 2000, which tracks small-cap stocks. The 30-stock Dow is up over 10 percent, while the tech-heavy Nasdaq has rallied more than 15 percent. The small-caps Russell is up nearly 14 percent.

Leading the way higher for U.S. stocks this quarter was the tech sector, which is up nearly 20 percent in the period. Tech giants Apple and Microsoft — two of the biggest publicly traded U.S. companies — rose more than 15 percent each for the quarter, but the sector’s best performer is an unlikely stock: Xerox. Shares of the copy and fax machine maker are up more than 60 percent to start off the year. They are also among the best-performing stocks in the entire S&P 500.

Not every sector performed as well, however. Health care and financials are the biggest laggards among S&P 500 sectors, rising around 5 percent and 7 percent, respectively. 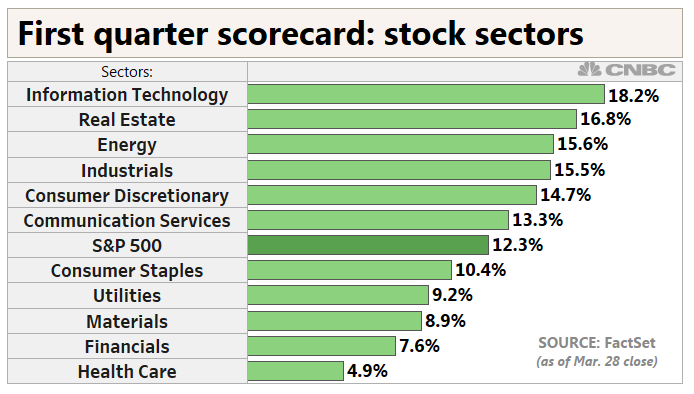 At the individual stock level, cosmetics giant Coty and fast-casual restaurant chain Chipotle Mexican Grill are the best-performers, followed by Xerox, Hess and Xilinx. Kraft Heinz, Biogen and CenturyLink rang up the rear, as they all fell around 20 percent. 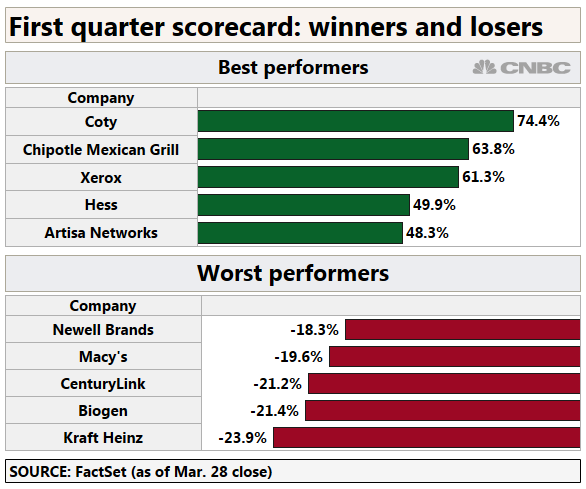 Global stocks also performed well this quarter, with Irish shares surging more than 26 percent, more than doubling the S&P 500’s performance year to date. Stocks in Greece, Italy and Canada also rose more than 12 percent each. Japan’s Nikkei index is up more than 5 percent along with Indian stocks, lagging their global counterparts. 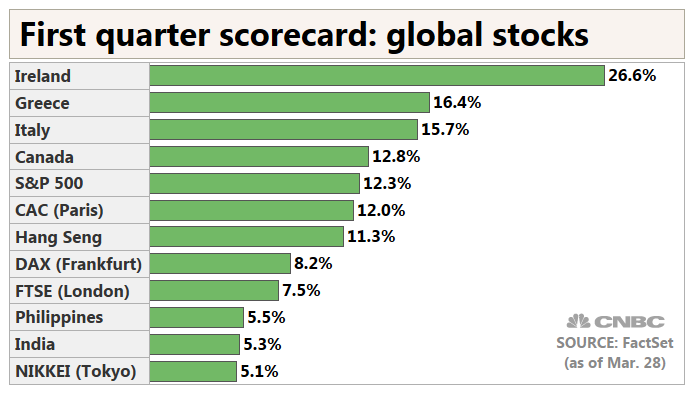 Stocks weren’t the only assets to do well in the first quarter, however.

Lean hog futures surged around 50 percent this quarter, while gasoline and U.S. crude oil futures are both up more than 25 percent. Coffee, wheat and cocoa futures fell sharply this quarter, sliding at least 6 percent. 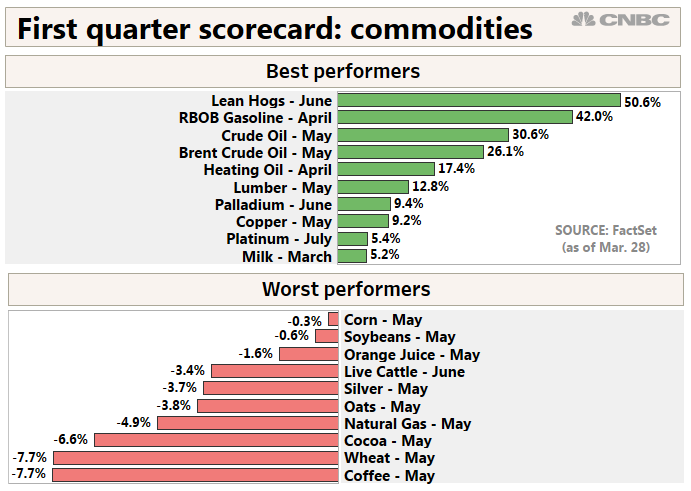