Brazilian stocks are off to a solid start in 2019, but whether they can continue to climb depends on one major policy shift: reforming Brazil’s overcrowded public pension system.

Brazil’s benchmark stock index — the Bovespa — reached an all-time high earlier this month and is up 8.6 percent for the year. The most widely followed ETF for Brazilian stocks — the iShares MSCI Brazil ETF (EWZ) — is up 7.3 percent.

Investors in Brazil and across the world are betting that newly minted President Jair Bolsonaro will push through key changes to the social security system in Latin America’s largest economy. But the path toward reform will not be a smooth one as the Bolsonaro administration, which already has a delicate relationship with top lawmakers, faces a lengthy legislative process.

The stakes are high because pension reform could boost the country’s flagging economy and give it some stability in the long run. Failure to enact the changes could stymie growth. The stock market’s gains could also evaporate as investors shy away from increasing risks in Brazil.

“We are on the bullish side in the sense that we are quite confident pension reform is going to be approved,” said Viccenzo Paternostro, partner at Legacy Capital, a Brazil-based hedge fund. “Pension reform is crucial because, otherwise, nobody is going to invest in Brazil because of fiscal issues, inflation and so on.”

“This is the main risk. If the pension reform is not approved, the outlook is very negative; nobody is going to invest,” Paternostro said.

Brazil’s retirement age for men who contributed into the country’s pension system for 15 years is 65; for women, it is 60. However, men can retire earlier if they pay into the system for 35 years, while for women it’s 30 years. This has pushed down Brazil’s average retirement age to the early-to-mid 50s, according to the Organization for Economic Cooperation and Development.

This system has raised concern over its sustainability and is viewed by many market participants as a brake on Brazil’s recovery from a massive recession.

Social security accounts for about a third of all government spending in Brazil and, in 2016, contributed to a record budget deficit. Brazil’s debt levels have also surged to around 75 percent of GDP.

Between 2015 and 2016, real GDP fell for eight straight quarters on a seasonally adjusted annualized basis before a rebound to start 2017. But the recovery stalled after the first quarter of 2017, with GDP growth failing to break above 0.5 percent since then.

“The government has had to put money to finance [the pension system], but the government cannot do that anymore because it is in a very fragile fiscal situation. The fiscal deficit was 7 percent last year,” said Rafael Amiel, director of Latin American economics at IHS Markit. “The government debt, as it is going right now, is not sustainable. It will eventually default if they don’t fix anything.”

Bolsonaro’s pension-overhaul proposal, which was submitted last month, aims to save the government more than 1 trillion reals — or about $270 billion — over a 10-year period. This proposal is far more ambitious than former President Michel Temer’s, which targeted 600 billion reals in savings. The measure would also implement a fixed retirement age for men and women at 65 and 62 , respectively.

However, Bolsonaro’s proposal faces a long legislative process. The measure will also likely be watered down during the process, setting up the market for disappointment.

“Timing is the key here, given the complex political process,” Morgan Stanley economists and strategists led by Arthur Carvalho wrote in a note earlier this month. “Although we believe reform will ultimately be approved, we think it will be delayed and a diluted version of what the market is currently pricing in.”

The bill was submitted to Brazil’s House Justice Commission on Feb. 20. If approved by the full House, it moves to the Senate. Any changes there would send it back to the House. 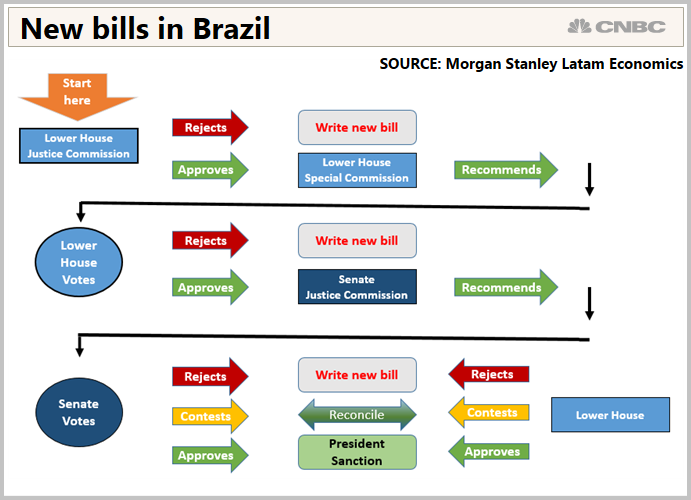 Morgan Stanley economists expect a House vote in August, while Goldman Sachs does not see pension reform turning into law before October.

“In general, if [Bolsonaro] moves forward with reforms meant to ensure public-sector sustainability and a reduction of the state’s role in the economy, there will be opportunities in key sectors,” said Jeffrey Lamoureux, senior country risk analyst for the Americas at Fitch Solutions. “However, we nonetheless believe the Bolsonaro administration will underdeliver on market expectations for pension reforms, which are an essential part of his economic agenda.”

The measure is also facing another problem: Bolsonaro himself. The right-wing president’s popularity has plummeted, with only 34 percent saying his government was doing a “great/good” job, according to pollster Ibope. That’s down from 49 percent in mid-January.

Bolsonaro won Brazil’s presidency last year in part by saying he would pass measures to reduce violence and curb widespread corruption. But since being elected, Bolsonaro has struggled to build the necessary coalition needed to move forward with those plans. Bolsonaro lost the support of Brazil’s top lawmaker, Rodrigo Maya, amid insinuations he was stalling on anti-corruption measures.

Brazilian stocks are down sharply this month. The Bovespa index has fallen 3.9 percent in March while the EWZ ETF has dropped 8.7 percent.

Nonetheless, many investors believe some sort of pension reform will get done and that will boost Brazilian stocks.

“Most people think some kind of reform is going to be approved because, over the past few years, the awareness of the population regarding the need to approve some kind of reform has broadened,” said Diney Vargas, managing partner at Sao Paulo-based hedge fund Apex Capital. “Companies will be hiring, people will have more jobs and people’s purchasing power will improve.”

But the process could go wrong, Vargas said. The plan could fail or, if the proposed savings are too low to change Brazil’s economic fortunes, “then we’ll have a problem.”

Paternostro likes Azul Brazilian Airlines, noting higher demand in the wake of rival Avianca Brasil’s filing for bankruptcy protection. “Assuming demand is going to increase, it will be positive for the company.”

Azul’s New York-listed shares are up more than 60 percent in the past six months, outperforming the Bovespa index and EWZ fund by a wide margin.

Another stock on Paternostro’s radar is department store chain Lojas Renner. “Their operating leverage is quite high, and if consumption is going to increase, then it would lead to a very beneficial net-income outlook for the company,” he said.

“Brazil is in a place where, if you approve the reforms, you’re going to see the economy growing faster,” he said.